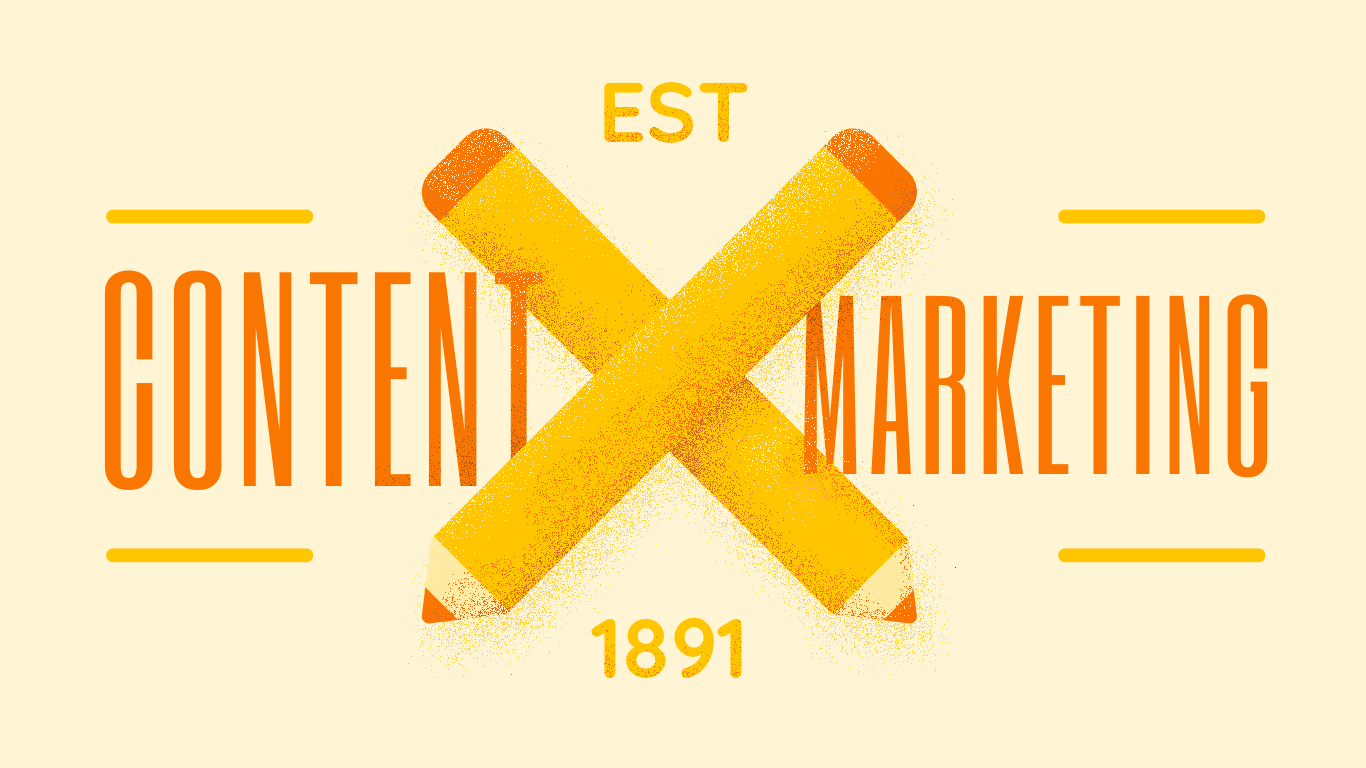 “We are not makers of history. We are made by history”. The above sentence was quoted from Martin Luther King Jr. and although it was not concerned with content marketing in the original, it is also important in this topic.

Some say that everything that is happening in the world of content today has already happened and that it's a fact that preparing new content pieces instead of being creative work boils down to reheating leftovers.

However, we should understand that history shapes us as marketers: it allows us to learn from the mistakes of others and draw on a lot of inspiration from the old things created long, long ago (and “far, far away” as well).

So I invite you to a short content history lesson. And just as if you were learning about the Battle of Britain, we will take a look at the Great Ongoing Content Battle to Attract Customer Attention.

Before we start, however, it is worth mentioning the role of content marketing - in the end we will go back to the times when nobody has even heard about its definition.

What criteria allow us to conclude that all the companies mentioned below dealt with content marketing, although they were not fully aware of this fact?

First of all, they educated their clients. The foundation of content marketing is primarily an educational message, with the mission of creating an image of brand representatives as experts and allowing customers to acquire the skills and knowledge they desire.

Secondly, they increased customer engagement and easily got their attention. Clients appreciating content, like a blog post, are considered to be potentially better quality consumers since they enjoy expert knowledge. Comparing them to, for example, recipients of a mailing campaign, they are determined to acquire the information. Meanwhile, recipients of corporate e-mails include both people who are supposedly interested in purchasing a given product or service, but also consumers who do not belong to this group.

Of course, I do not have to remind you that there were no e-mails in the nineteenth century, but the principle of "demand for knowledge" was still applicable.

Inconspicuous Beginnings: How Did It All Start?

What do cookies and content have in common? The answer to this question is simple: baking powder and August Oetker. He came up with a very innovative idea for his time (1891) by deciding to put recipes on the packaging of his cooking product.

Oetker was the “content marketing pioneer”; although the most famous example of this type of activity is the "The Furrow" , a magazine published by the American producer of agricultural machinery John Deere. The first edition of the guide was published in 1895 and by 1912 circulation was up to four million. The magazine's authors put advice on the use and maintenance of agricultural machinery and the rules of running a farm and the magazine also included advertisements for John Deere products. Currently, the magazine is published in more than twelve language versions in over forty countries around the world. Interestingly, despite the introduction of the online edition, the paper-based magazine is still distributed by the brand's dealer network, just like the distribution of the first issues of the magazine.

In 1900, Michelin published the famous 400-page "The Michelin Guide", which included tips for proper car tire care and maintenance, a map of gas stations, hotels and mechanics. It is interesting to note that in France there were only about 3,000 car owners in that year but 35,000 copies of the publication were printed. Today, the guide is published in 14 languages, contains data on 14 countries, and is distributed in over 90 countries around the world.

These publications, however, were only the beginning of the "content revolution".

In the 1930s, many companies also regularly used the opportunity to share their content on the radio. One innovator of this idea was Procter&Gamble (hereinafter: P & G; a company producing so-called quick-transferable goods, e.g. cleaning products), wishing to reach their clients, mostly housewives. The brand decided to use a then-new technological novelty—radio. The company not only sponsored radio programs, but also created its own radio dramas, during which they promoted their products. One of these types of products was "Oxydol" soap; interestingly, this is how we got the term "soap opera". P&G also benefited from the creation of television. In the 1950s, it transferred its idea from the radio to the small screen.

However, this was only the beginning of creative work on content.

In 1964, Hasbro launched a new toy product, GI Joe figures, manufactured in a new size of 3 and ¾ inches. They competed with the then popular figurines from "Star Wars"; however, they were not associated with any feature story. Marketers employed in Hasbro implemented an clever idea, which was innovative for the time. They created the history of toys as heroes of the saga and established cooperation with Marvel Comics. The success of this collaboration was so great that in a short time the comic books turned into a television series (1985) and a feature film (2009).

Along with the development of the Internet, the scope of activities related to the creation of marketing content has been significantly expanded. Companies have started producing so-called white papers, or the analysis of technologies or solutions published in the form of reports published in pdf format. These documents are a commonly-used way to acquire potential customers.

E-books are another popular platform. The first of them ("Unleashing the Ideavirus") was written in 2010 by the American marketing expert Seth Godin. Godin made it available to the public for free, which resulted in the document being downloaded about a million times. The consequence of the undoubted success of the publication of this online work was the adaptation of its format not only by other private individuals but also by companies. E-books have gained widespread popularity because the emphasis is placed on the related aspect with the education of clients, and not, as in the case of white papers, on related issues with official and complicated technologies.

Of course, the internet is not just a written word. More and more content is created using the possibilities that social media gives us (Facebook, YouTube, LinkedIn etc.). We create films, infographics, podcasts, etc.

And finally, to solve the mystery, where did the name "content marketing" come from?

The very concept of "content marketing" was used for the first time in 1996 by John F. Poppedahl during the meeting of the American Society for Newspaper Editors. He then gave a lecture, the main thesis being that newspapers were selling in larger editions, so editors had to consider what topics readers were looking for. In 1998, Jerell Jimersen took over the first employee position officially associated exclusively with the performance of the marketing duties, "Director of Online and Content Marketing" at Netscape.

Summary, or What History Tells Us

What can we learn from the above stories? Let's try to summarize it in several key points:

1.    Be brave. Each of the above brands did something innovative for its time. It’s likely that the people who came up with the ideas did not get the needed support from their team and were probably told that their ideas did not really make sense and will not succeed. Now we know that the risk paid off. Sometimes it's worth trying to do something new—nothing ventured, nothing gained, right?

2.    Understand the needs of your target group. Would P&G be able to reach housewives effectively without knowing how they spent their free time or without realizing what content they would be listening to on the radio? They had to know how much time they spent in their homes and this is probably how the idea for radio programs, which in this case were more effective than outdoor ads, came to be.

3.    Instead of fighting the past as something old fashioned, inspire yourself with it. Half-joking, half-serious vintage things are back in vogue. Think about the Hasbro idea, for example, and add a story to your product. In the end, nothing works as well for clients as a bit of storytelling.