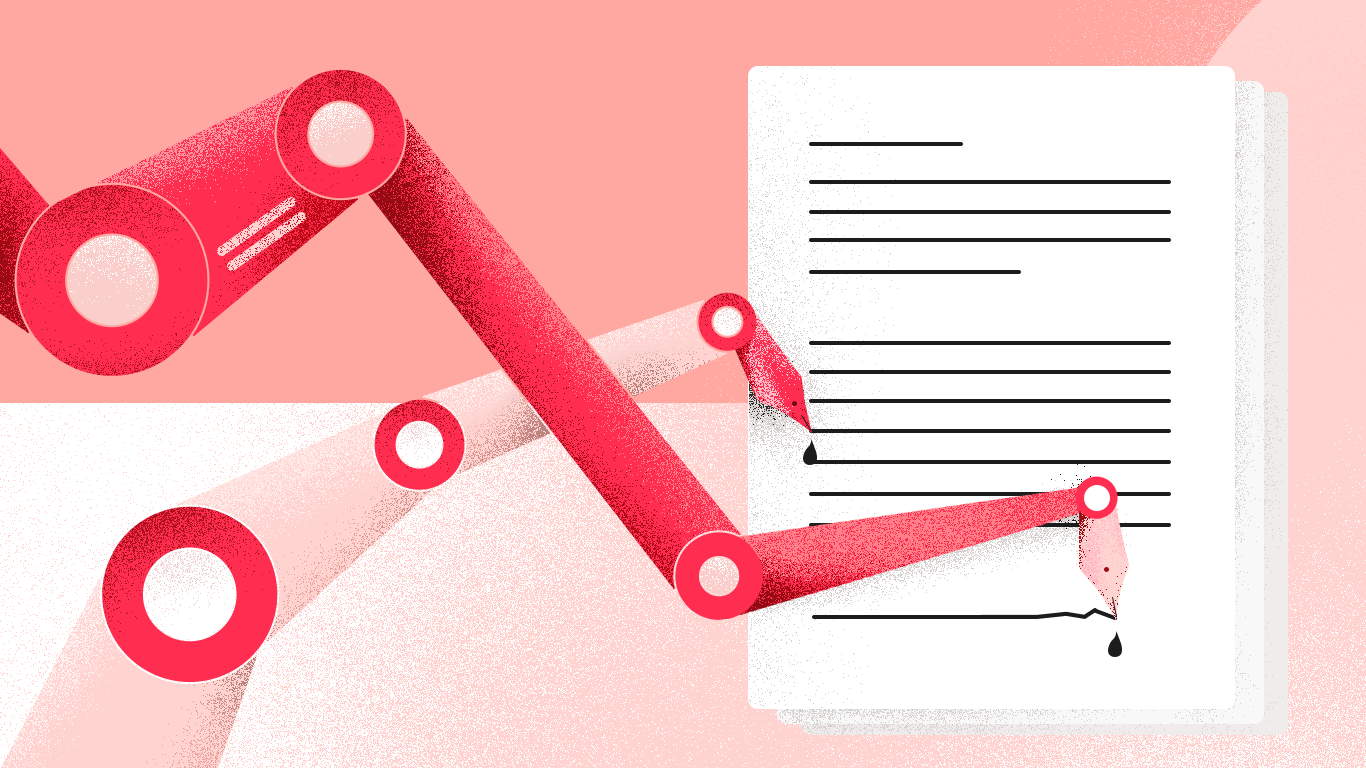 According to the Gallup Institute, 73% of Americans believe artificial intelligence will eliminate more jobs than it creates. However, only 23% are worried about their own jobs. Artificial intelligence appears to have a great opportunity to prove itself in the field of creating content. The only question is in which areas will it deprive content creators of work, and in which they will definitely make their lives easier. Let’s look at the possible outcomes of this issue.

How do machines learn?

To enable artificial intelligence to work, you need one thing — data. Every company collects it, though in many different ways. The more data you start with, the more useful and precise the conclusions they lead to are.

How can we define machine learning itself in a simple way?

If we want to learn the algorithm for recognizing the faces of various politicians, we would first have to provide a program with "big data", that is, as many photos as possible. Then we have to conduct tests to assess the choices of the algorithm — that is, whether it correctly assigns faces to names, especially when it comes to random photos of people outside the base. The algorithm can be considered efficient if, after many tests, it is able to recognize a particular politician in a photo that it has not analyzed before.

We start with data in form of files or a database

We use the algorithm to order them according to established criteria

We create a model based on guidelines and conditions, according to which the algorithm is to analyze further portions of data.

Integrate the algorithm as an application or system functions

Algorithms in the newsroom

Here are two news headlines. Based on the information they contain, can you tell which one was written by a machine and which by a human?

“Tuesday was a great day for W. Roberts, as the junior pitcher threw a perfect game to carry Virginia to a 2-0 victory over George Washington at Davenport Field.”

“Apple’s holiday earnings for 2014 were record shattering. The company earned an $18 billion profit on $74.6 billion in revenue.”

The fact that it’s not so obvious is a sign that the algorithm works quite well. The first text was written by the algorithm used by the Washington Post, the second by a Business Insider journalist.

We do not have real-life robotic journalists yet, but outlets like Fox and the Washington Post already use them for short pieces of copy. So how does it work?

Algorithms know and can use up to 10 times more words than a human.

We start traditionally with data in this case in the form of a spreadsheet / database with a specific description of the fields. These can be sports results, weather parameters, stock market results, etc. Each parameter must be collected in real time and marked appropriately in the database in order to be written in a specific column.

This is based on the selection of specific phrases or conditions. For example, if the temperature exceeds a certain number of degrees, or the result of one team will be higher or there will be a sudden jump on the stock market. Then the algorithm assigns one of the specific phrases in the database and publishes information. The more advanced the rules, the more advanced the text.

These types of tools help journalists to write short news forms, such as weather alerts, hotel descriptions, or sports reports. Content writers who write simple news in the future will be replaced by creative marketers creating not only the content itself, but also the rules for the algorithms they use.

Algorithms can also write longer forms of content, such as poetry. This is a creative area on one hand, ideal for A.I., and a bit tricky on the other.

AI can manage here because poetry does not have to be grammatically correct, words do not always have to match according to the rules of a given language, and algorithm errors are harder to detect. But it is also a difficult field, because poetry flows from feelings and emotions, which robots don’t have—yet. So how can computers write poems despite their lack of a personality?

As always, we start with data. The algorithm-poet must read quite a few lines. Google instructed the algorithm to read several thousand books in their experiment. Then they checked to see if after the first and last sentences the computer was able to select words between them so that a meaningful sentence would form. Then each subsequent sentence had to be somehow related to the previous one. The first "Gothic-like" poem was created in this way, and this is just the beginning of it:

Algorithms learn on the basis of many other works and links between words. They know which connections occur most often and which the least often. In this way, algorithms can build sentences. When choosing the first word, artificial intelligence selects the next one taking into account the most common combinations.

The most important problem, however, remains the logic of the entire work, the creation of cause-and-effect relationships and the recognition of the context. That is why a Japanese AI project entered in a writing competition did not win the main prize a few years ago. This book did not win the main prize because of problems with a credible description of the characters. Unfortunately, AI does not know us well enough to empathize with human thinking and its emotions, even if it reads thousands of psychological books.

Algorithms work very well in text correction applications, such as Grammarly. This application is also based on algorithms but this time, apart from vocabulary, it is based on implemented language rules, wording, tenses and other grammatical rules. This means that it is able to edit and improve our texts like a professional editor. As a result, it may compete with professional proofreaders in the future.

Is it possible to create content tailored for every user?

The answer is yes. The degree of accuracy may vary, but yes.

Algorithms can now create a lot of content and significantly assist content creators and relieve journalists of simple tasks such as writing news or match reports. But content creators with an idea or creative approach with a human element will still have a role. We must redefine our position in the world. But we also have to give some control to automation and computers, and to work with them.