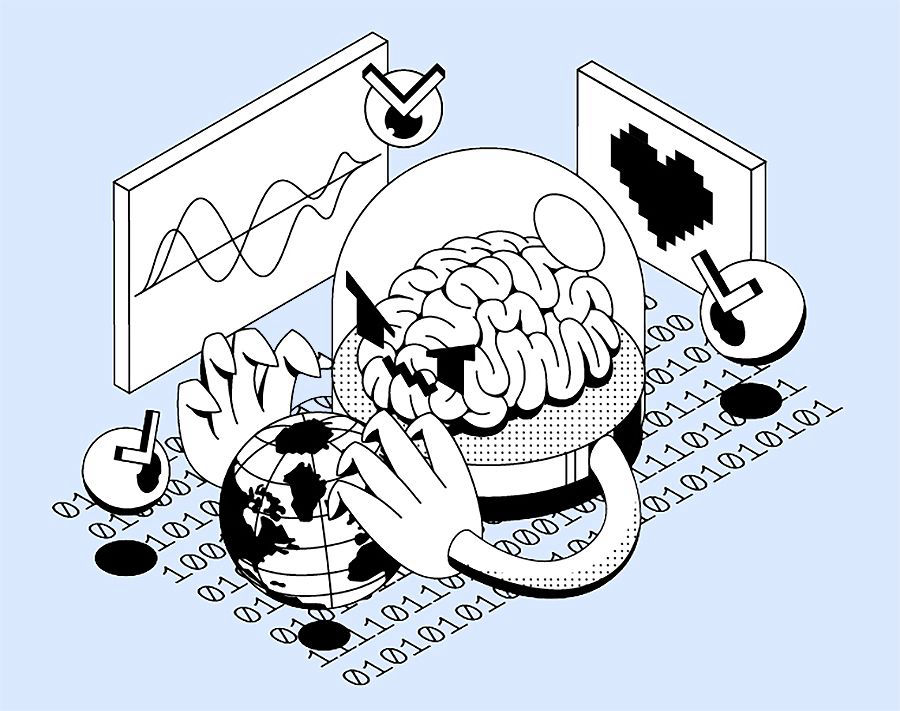 In Plato's dialogue "Phaedrus", Socrates tells a myth about the invention of writing. According to the myth, Theuth, the god of arts and sciences, presented writing to the god-king Thamus, as something that would "make the Egyptians wiser and give them better memories". The king replied that humans would not benefit from this invention "This discovery,” said Thamus “will create forgetfulness in the learners' souls, because they will not use their memories; they will trust the external written characters and not remember of themselves".

Plato seems to agree with this view, however he wasn't exactly following it, as he was also a very prolific writer. The important thing is that in this moment in history began the reflection about the relation between the human mind and technology.

How the internet has changed our brains

In the past week, you have probably "googled", "tweeted", "blogged" or "posted" something. These activities did not exist two decades ago, but today they seem perfectly natural (when we're doing it and talking about it). Social media and the internet in general changed the way we think about anything. We are not just writing and reading, and not trusting our memory by using Google – our minds have physically changed because of the way we're doing all of it.

In his famous The Atlantic article from 2008, Nicholas Carr gives plenty of examples of how using the internet has changed our cognitive processes. We are losing the ability to focus, because on the internet we are constantly overexposed to new streams of information. This works as every other type of addiction – when I have my internet browser open (like right now), I constantly feel that somewhere out there “something is happening”: maybe not something important (most probably not), but surely something new that will give me this dopamine kick I’ve become used to.

Mobile technology has pushed this trend even further: a recent study shows that people without access to their phones have more problems concentrating than people that have their cell phones on them.

One of the central problems in philosophy of mind is the mind-body problem: what is the relation between mental processes and the material body? Is the mind completely determined by biology? Where is the mind located? If we answer the last question using the embodied cognition hypothesis – that different parts of the body are playing their part in the cognitive process – this just raises another question: what exactly is "the body"? Or, more precisely, where does the body end?

Let's suppose that I am about to calculate 9!. It will take some time and I might make a few mistakes during the process but I can do it in my head. I can use a finger-counting method like "chisanbop". I can also write it down on a piece of paper with a pen. Finally, I can just use my calculator and get the result right away.

Where do we put the boundary between "real thinking" and "using tools"? Of course resolving math problems in your head is still the most impressive way to do it, however this does not mean that other three scenarios do not involve "thinking" or "cognition" (especially regarding the fact that in the second one I was still using my own body). As Ludwig Wittgenstein said, thinking is a process, so we have the right to say that it "takes place" in our head, but also in our mouth (when we speak) and through a pen and a piece of paper (when we write).

In 1998 David Chalmers and Andy Clark published a famous paper, The Extended Mind. The central thesis is that things external to our bodies take part in our cognition in the same way that our bodies do. When using my fingers, my pen or a calculator, my mind works in other ways than it does when I am calculating an equation in my head, however I am still mentally involved in this process.

The conclusion is that tools just replace some elements of our mental processes. Just like writing eliminated the need to memorize the whole Iliad and Odyssey, Google Maps in our phones has freed us from the necessity of remembering which exit on the highway we should take. Thing that I write down is part of my mind –  I can say the same thing about my calendar with a mark on my wife's birthday or about the spreadsheet with a list of links to papers I will use in my future research.

If so, the extended mind has serious ethical implications. As Clark and Chalmers pointed out, if we take the hypothesis seriously, we should see these external parts of the mind as, well, parts of the mind. In other words, stealing my cell phone would not be just stealing – it would be an assault that took away a part of me. And as absurd as it may sound now, if we look at the problem from the "Platonic" perspective, it may be inevitable in the near future.

How AI can take over the world

This power of "mind extension" has many upsides. We may complain that "the youth of today" can't do this and doesn’t know that, but we must be aware that this conflict between generations is as old as humankind. The fact that today we can know less about things that the older generation had to know in order to survive is not necessarily a bad thing since we can focus on solving other things. If I know how to use a pneumatic nail gun, it does not matter if I can use a hammer, since with the nail gun I can do the job much faster and more precisely. Using a hammer can benefit me in ways that the nail gun would not (such as can improve my accuracy and strength), but I can think of many things that would improve if I use a nail gun instead of a hammer.

The difference however, is that by using a pneumatic nail gun I rely more on things that don't really depend on me. Fixing a nail gun or making a new one is definitely much more difficult than fixing a hammer or making one. The more complex the tool is, the more fragile and harder to rebuild by one person.

So this is the most disturbing conclusion that comes from the extended mind hypothesis: we do not train our brains in areas where machines can replace us, and as a result, we are losing the ability to function without them. If I rely completely on my phone to tell me everything, from making a tomato sauce to which direction North is, I would be helpless if one day I find myself unable to use it.

This is why education about the technology in an in-depth and accessible manner – like our AI Schools programme – is so important. If technology becomes part of our minds, we need to better understand how it works.